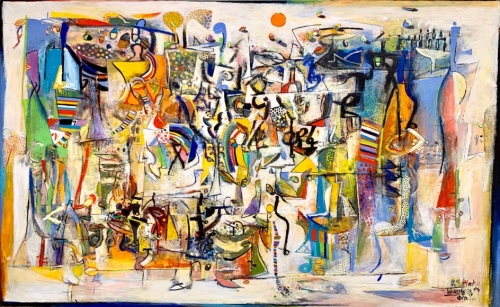 Thanks to the fine staff at Sullivan Goss, there’s at least one pre-pandemic pleasure that’s still available in unadulterated form, and that’s the sublime experience of losing yourself in contemplation of a great painting. The exhibition Wosene Worke Kosrof: For Love of Words, which is on view at the gallery through September 21, is packed with some of the most generous and striking examples of contemporary abstraction you’re likely to find anywhere right now, and all that’s required is that you mask up before visiting the gallery, which is open daily 10 a.m.-5:30 p.m.

Kosrof emigrated to the United States from Ethiopia in 1978 to study fine art at Howard University. He’s been painting ever since, and for the last several decades, he has made the San Francisco Bay Area his home. The work derives in part from his early training in the Amharic script, the written version of the Amharic language and Ethio-Semitic tongue that’s spoken by more than 20 million people. For Kosrof, the letter forms that animate the fantastically rich and visually active surfaces of his works lost their function as signifiers long ago. Today he employs them as compositional building blocks rather than as elements in written communication. Teamed with his bright and intricately varied palette and vigorous manipulation of figure and ground effects, the Amharic script fragments take on a dreamlike resonance.

In contrast to the work of Cy Twombly, where there’s frequently an effort to render through painting the appearance of, for example, chalk marks on slate, Kosrof eschews trompe l’oeil in favor of bold abstraction. Shadow grids generate cascading effects as the eye moves through the manifold distinct facets of each heavily worked painting.

The crowning achievement on view in this show is a large painting called “Elemental Coltrane” from 2018. Elegantly hung on its own purpose-built temporary wall, “Elemental Coltrane” speaks of hours spent in the studio experimenting, meditating, and exploring an intensely personal vision. Like Coltrane in his “A Love Supreme” mode, Kosrof achieves an extended lyricism that’s equal parts mystic and sensual. Viewers who answer the call will be rewarded at this outstanding exhibit.