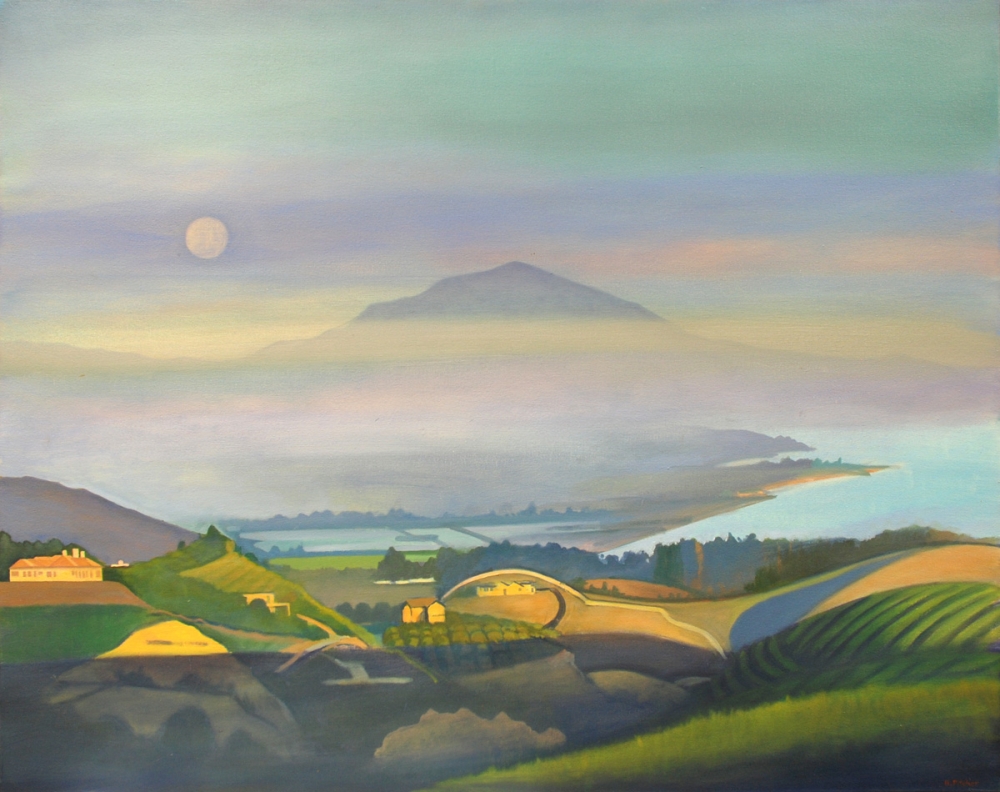 Santa Barbara and its environs offer a visual treasure trove of hidden gems. Small spaces of secret beauties, coves of elegance and broad vistas of graceful nature can be found by an inquisitive eye. One man has set these sights onto canvas with great expression. A lifelong resident, painter Hank Pitcher is a true product of his environment. His visual efforts are eloquent in the progression of art history and Plein Air painting.

In America, there is a tradition of Plein Air landscape painting that immediately followed the French Impressionists, in particular Claude Monet. Artists like John Singer Sargent, Winslow Homer and William Merritt Chase were aligned to Monet by light, time and association.

Later in the 1930’s, Edward Hopper asserted a strong progression from Monet in his severe compositions of the study of daylight, in rooms, lighthouses and his general ability in the challenges of Plein Air painting.

In California of the early 20th century, artists like William Wendt and Edgar Payne led a movement of Plein Air painters in Laguna Beach, Monterey and Santa Barbara. Their primary dedication was to portray the landscapes of California, free of the growing urban sprawl.

Then along came the Abstract Expressionists of the late 40s and 50s out of New York. One of their primary promoters was artist and arts writer Fairfield Porter. When Porter dropped his pen, the East Coast writer turned to painting in the tradition of Hopper and Monet. Quite differently, he understood the freedoms and liberties that artists like Willem de Kooning brought to painting.

Porter and his protégée artist Alex Katz developed a way of painting wet into wet with simple overlapping paint that has influenced generations of Plein Air painters since the late 1950’s.

In the California of 1951, Isla Vista was a sleepy collegiate suburb, an outpost on the beach, of Santa Barbara. The parents of two-year-old Hank Pitcher arrived from Pasadena, California, and called it home. About a decade and a half later, the young football star left high school wanting to be a painter. Loving to surf, he stayed close to home, attending the College of Creative Studies, an alternative program within the University of California at Santa Barbara.

As an artist, Hank Pitcher's natural instincts were drawn to the daytime light of Claude Monet. Forming his approach in the 1970's, Pitcher worked closely with pioneer Plein Air landscape painter Ray Strong in Santa Barbara. Pitcher is primarily dedicated to scenic vistas. He is adept at architecture, but does not generally choose to paint cityscapes.

Once Pitcher found his place at UCSB, as a director of the Painting Department of the College of Creative Studies, he would bring in Paul Georges, a Fairfield Porter protégée, a link to the East Coast school.

The maverick vision of Porter, the economy of Alex Katz and the elegance of Neil Welliver fueled Pitcher's stylistic inclination of Plein Air painting. Pitcher's quest was determined with the variable ocean light of Santa Barbara, Goleta, and the Ranch in Gaviota.

Pitcher faithfully recorded the daytime light and ever-changing vistas of the Santa Barbara coast in his bold, post-Abstract Expressionist approach to landscape painting.

Low and behold, a school of painters, artists dedicated to the landscape, formed around Pitcher's efforts. In Santa Barbara, they initiated a coalition called the Oak Group. These artists developed an agenda to use their Plein Air paintings to protect the environment, an progressive-minded concern in a time of pollution and global warming.

With his approach to painting, these artists are dedicated to Plein Air. They have mapped a new California School. Marcia Burtt, John Comer, Michael Drury, Arthur Tello and many others have become significant artists. The relevance of the Oak Group has spread. In Los Angeles, there is Larry Cohen and his brother Bruce Cohen. In New York, it is Roy Fowler, Greg Botts, and Paula Heisen. In San Francisco, it is Stanley Goldstein and Peter Nye.

I had the pleasure to study with Hank Pitcher in the mid-70's at the College of Creative Studies, along with professors Paul Georges and Charles Garabedian. Hank greatly influenced my understanding of painting. His dedication to the landscape school is always alive and relevant, a commitment with force and passion. I have always believed that he is under the shadow of early Claude Monet. And why not! Monet had a radical approach. He was born in a poetic time in the arts and in painting.

Like the Bay Area Figurative and the Porter School, Hanks asserts a bold progression that began with Monet. Hank’s art and scenic paintings are much greater than pretty pictures for tourists. His art will always challenge the way we see. In his subject, the composition, the application of paint and in the experience of life, Hanks shows us what we have never seen before. These are the many reasons that Hank Pitcher is a great artist.