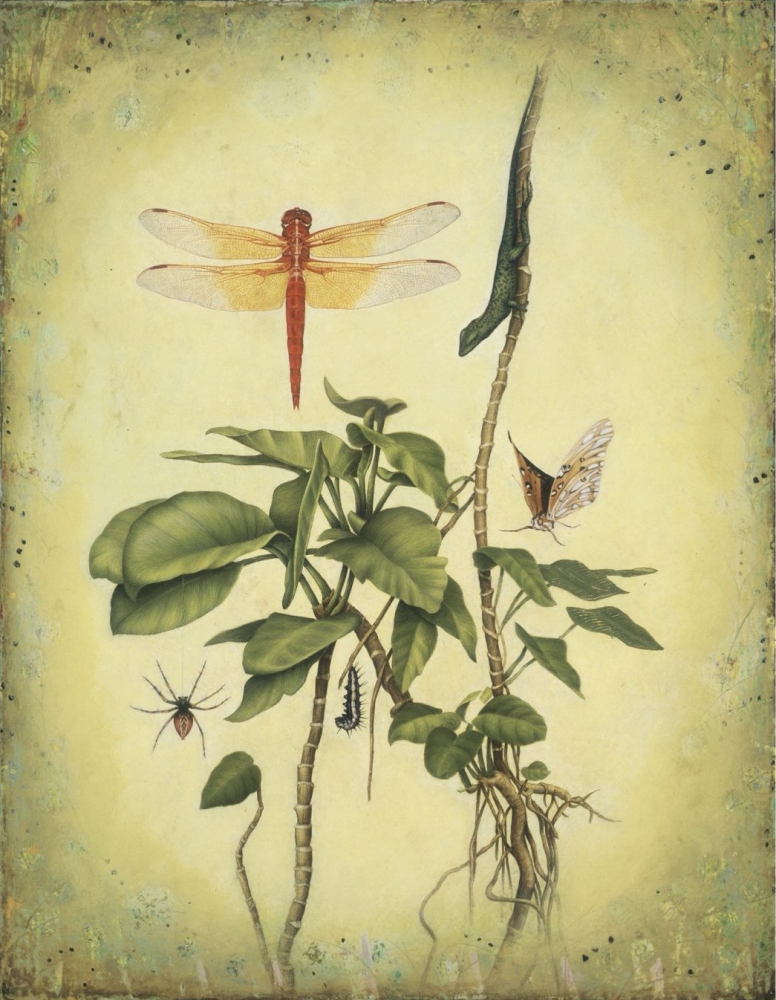 Recently, I asked folks to send stories about animals who had changed their lives. Artist Susan McDonnell sent me her story, told through a painting.
As an explanation for the painting, here is what she wrote:

“In the early 2000s, I lived in a house with a small garden pond. In the late Spring, a Red Darner dragonfly took up residency. I started taking photos at a distance and got closer and closer. Over time the dragonfly let me get within inches and then let me lightly touch its wings. This dragonfly showed up every morning around 10 and patrolled the pond until around 4 pm for about 4 months. We ‘visited’ every day and I spent a lot of time quietly observing and marveling at the dragonfly’s beauty. As you can see from the photo this dragonfly was a bit of a ham.”

McDonnell was already an accomplished artist, but her moments with the dragonfly were transformative. “It was at this time my paintings became more focused and detail-oriented in subject and technique,” she wrote. “All that slowing down, observing and being completely delighted every time I went to the pond and saw the dragonfly had returned had a huge influence on my paintings from then on.”

Today, young or old, our vision is curiously, simultaneously, pulled back and extended. At the edge of a yard (if we’re lucky enough to have one) or from an apartment window or condo balcony, we might just see what McDonnell saw. A butterfly spiraling, a hawk circling, a blinking fence lizard still cold from the winter.

By nature, young children are inclined to see life as new and encompassing. So can we, if we pay attention.

The art of seeing is about resilience and transcendence. During the research for OUR WILD CALLING, I interviewed artists and scientists who had learned how to look deeply at life. In the looking they found their own resilience. At Scripps Institution of Oceanography, Paul Dayton told me how he teaches students about the “X-ray” tradition of Australian Aboriginal art, which exhibits an elaborate understanding of the bone and organ systems of animals, “even showing the split lengths of snake lungs.” He marvels at their mythology of animals, plants, and even rocks, and their concept of Dreamtime, where all lives and stories exist forever.  “These people were and are spectacularly accomplished naturalists. When you look at those images, if you let yourself fantasize, what do you think these animals dream about?” He challenges his students to go beyond the lab, to have the courage to dream the lives of other animals, an ability they were perhaps born with but atrophies in a society and education system disconnected from nature.

Here is a moment for your children, for you, to look — to paint, draw or photograph what you see. Keep an indoor/outdoor illustrated journal. Set up a table next to a window, with art supplies. In her book The Nature Connection, naturalist and artist Clare Walker Leslie writes, “I often draw little landscapes in places where nature seems hard to find—out a classroom window, along a highway, or outside a hotel. Do you remember ‘Where’s Waldo?’ If you look, you’ll be surprised at what you might find.”

Beyond seeing is becoming.

Robert Bateman, a Canadian icon famous worldwide for his paintings of wildlife, is deeply concerned about that disconnection. Now in his eight­ies, Bateman began his artistic career as a boy painting birds viewed from his bedroom window. He saw the world as a bird would and for the rest of his life experienced the world from that viewpoint, of how a bird might sense the world combined with his own insights. Such sensitivity is felt both from outside one’s own body and from deep within it. At the opening of the Bateman Center in Victoria, British Columbia, I realized for the first time how his paintings were truly meant to be seen—as portals. Some of them are wall-sized. On the walls, yes, but also coming out of the walls, which seem to bulge: a bear turning toward the visitor; a bison exhaling clouds; wolves; eagles—all of them alive.

I was stunned. Later I asked Bateman how he accomplished that feat. He said, “Think about the Ice Age artists of Europe twenty-five thousand to thirty-five thousand years ago.” Look carefully at those ancient stalking lions, he added, those hulk­ing cave bears, those magnificent horses flying through the millennia with their heads together, legs straining, manes flowing in the wind, mouths open and breathing, their eyes looking straight ahead. Describing these animals, Bateman’s voice grew distant. “I can practically smell them, they are so real.” Then he answered my question directly: “I become the bear.”

We can do this, too. Perhaps not with a bear, certainly not with a prehistoric horse. But we can become the dragonfly just beyond the windowpane. We can see in its wings the pattern of the universe. And then, with a pencil or brush, share what we see with someone we love.