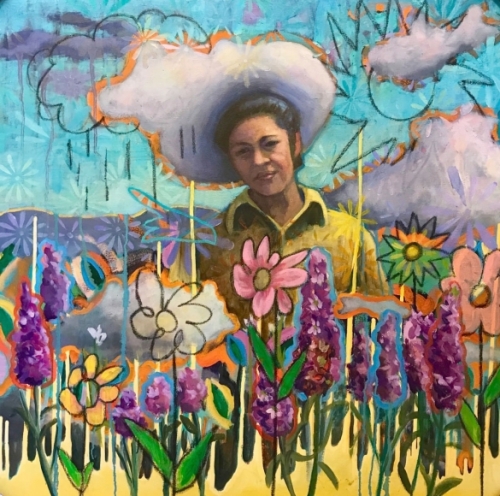 Clad in a Mexican peasant outfit, the young woman confidently sits astride a horse rearing on its two back legs while a black and white cow observes nearby.

The title of the enigmatic oil painting is “Greetings from California, 2020,” and it is part of artist Holli Harmon’s first solo exhibition, “Califia,” on view through Sept. 21 at Sullivan Goss-An American Gallery on East Anapamu Street.

“The painting was inspired by our everyday greetings of ‘Hello.’ All of the words that I have obscured hold a cultural influence here in California,” Ms. Harmon said. “We are a destination to visit, and countless tourists have sent off postcards with ‘Greetings from California’ on the front.

“We can comfortably use any of these words of welcome, depending on your style. The one you may not be familiar with is ‘Haku,’ which is our native Chumash.”

She explained that the title of the show, “Califia,” refers to the fictional queen of the island of California, who was first introduced by the 16th-century poet Garci Rodriguez de Montalvo in his epic, “Las Sergas de Esplandian,” written around 1500.

“The Califia Series plays with California’s namesake. Califia is a mythical warrior queen, who raises an army of women warriors,” said Ms. Harmon. “The paintings in this series feature strong female figures who unravel the numerous layers of culture that continue to accumulate in California. The paintings are built by layering multimedia and imagery that explore ideas that define who we are, where we came from and where we are headed in the most populous state.”

Each of the more than 20 paintings is rich in layering and detail, which is very purposeful, according to Ms. Harmon.

“The words in the ‘Greetings from California’ painting are deliberately hidden to provide a visual experience for viewers to discover. I want their reactions to be ‘Oh, my gosh, I didn’t see that before.’ I want the information to unfold over time.”

The artist, who describes her work as “contemporary traditionalist,” grew up in Redlands and came to UCSB for her bachelor’s degree and to San Diego State for graduate school.

“I have lived along the coast of California ever since. My husband and I migrated back to Santa Barbara to raise our children and have remained here for the past 30 plus years,” said Ms. Harmon, who is married to Terry Harmon and has a son and a daughter.

She said “the seed was planted” for the Califia series while she was working on “The River’s Journey Project” in 2018 during which six women artists followed the Santa Ynez River for more than a year from its source to the sea.

“As I painted, the river morphed from a landscape into the figure of a woman,” said Ms. Harmon.

“I find myself to be a contrarian at times. My work revolves around human experiences that are connection points between different cultures and generations set in iconic California imagery,” said Ms. Harmon.

“My paintings are material records of these places and people,”