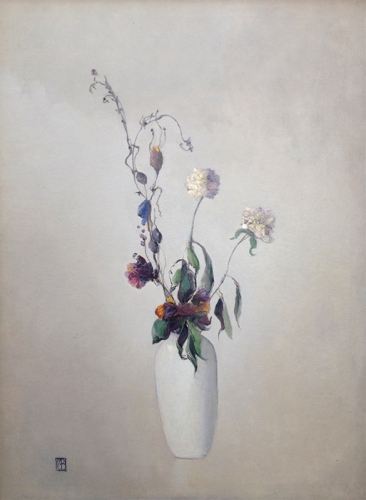 Leon Dabo (1864-1960) was a vigorously productive and successful artist who began his career in the early 1890's as a master muralist working on large commissions in public institutions, churches and synagogues in New York, Brooklyn, Long Island and Philadelphia. During that period, he worked under the direction of John La Farge (1835-1910), then one of New York's most respected artistic innovators and technicians. His first successful submissions into juried art competitions were made in 1901 to the 39th Annual Exhibition at the Bridgeport Public Library and the 76th Annual Exhibition at the prestigious National Academy of Design in New York. In the next few years, Dabo may have submitted to major annual exhibitions around the country, but was apparently rejected, a rejection he would recount for years.

Still, recognition was close at hand. In May of 1905, he had five paintings accepted for the Winter Exhibition at the National Arts Club in New York. This began an unbroken sixteen year string of one hundred and one public exhibitions that extended into the first years of World War I. In this period, he exhibited more than seven hundred canvases in sixty-four venues, including thirty-five solo exhibitions. Few American artists could boast of careers with such success. In this phase of his life, Dabo participated in two exhibitions that would change the course of American art forever: the 1910 Exhibition of Independent Artists organized by 'The Eight' and the storied 1913 'Armory Show' in New York, for which he was an organizer.

Early in 1918, Dabo joined the war effort, eventually serving on General Hersey's staff. In March of 1919, he returned home and once again took up the brush. For More on Dabo's Service in WWI, click here. At fifty-five years old, he was no longer as phenomenally productive as he was in his earlier years. Between March of 1920 and June of 1939, Dabo participated in forty-two exhibits, showing nearly two hundred canvases in thirty-three venues. Prominent galleries like Knoedler & Co. showed his work and he was made a Chevalier in the French Legion of Honor for his contribution to the arts. He was also elected as an Associate Member of the National Academy.

When World War II broke out in Europe, he and his wife were living in Paris, where he exhibited regularly in several galleries. He was unable to get his wife and his life's work out of the city before the Germans marched into Paris in June of 1940.

There were a number of formidable problems for all Americans trapped in Paris without exit visas, but the seventy-five-year-old Dabo had additional complications. He was a distinguished veteran of the First World War, decorated for his participation in Verdun and the offensive at Sonne. He also had his life's work - over three hundred canvases - that he wanted to save and bring back to the States. And, his wife, Stephanie Ofenthal, was Jewish.

It took four months, but he got himself, his wife and the three hundred canvases across the border through Spain, to Portugal, and eventually back to New York. In 1941, Feragil Galleries of New York helped him publicize the struggle of the French people living under Nazi occupation and his own heroic escape with an exhibition entitled "When I Last Saw France." Many of the major U.S. newspapers reviewed the exhibition.

In the final twenty years of his life, a time for complete retirement, Dabo still managed to enter twenty-two exhibitions, where he showed more than fifty canvases, and was made a full signatory member of the National Academy. Though his health declined considerably in the last five years of his life, he managed to paint into his ninety-first year.

By the end of his life, he had exhibited over a thousand canvases. Solo exhibitions of his work in the United States were held in Los Angeles, Chicago, Indianapolis, Boston, New York and Washington, DC. Internationally, he had one-man shows in Montreal, London, Dresden, Berlin and Paris. Though Dabo was upset by early rejections, his lifetime record would be the envy of most artists. At the time of his death, his work was held in the permanent collections of fifty of the finest museums in the world, including the Metropolitan Museum of Art, the Smithsonian, the Mus'e d'Orsay and the Louvre. 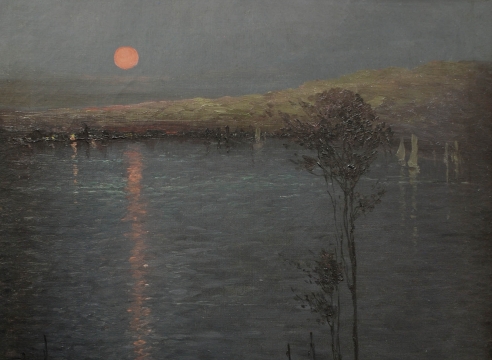 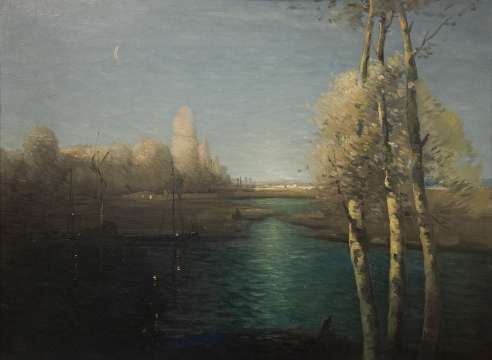 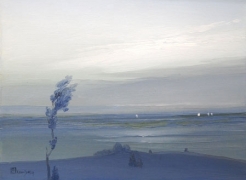 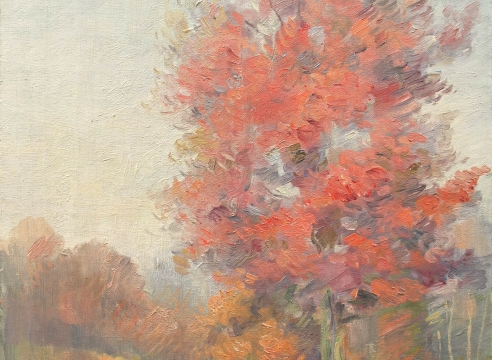 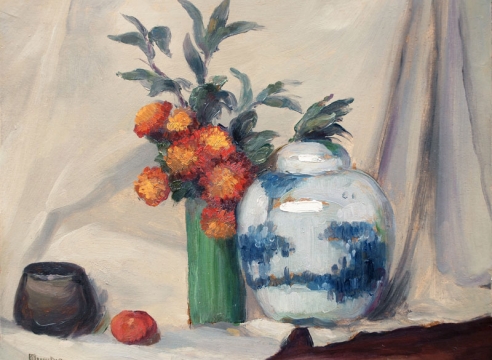 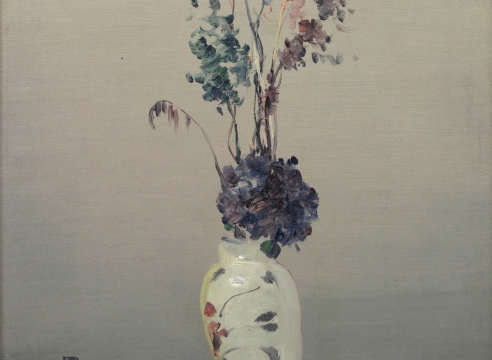 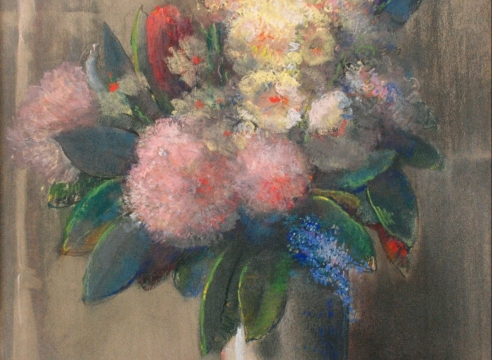 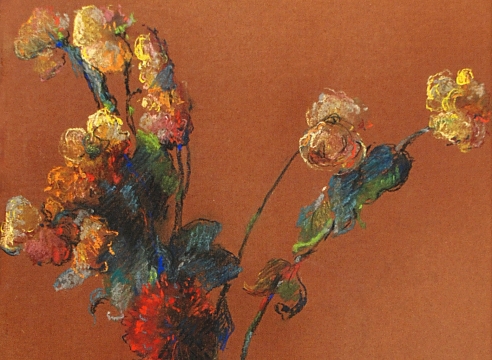 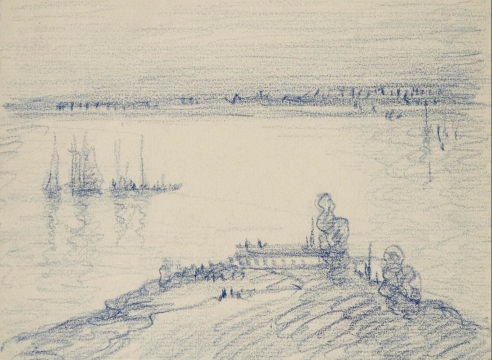 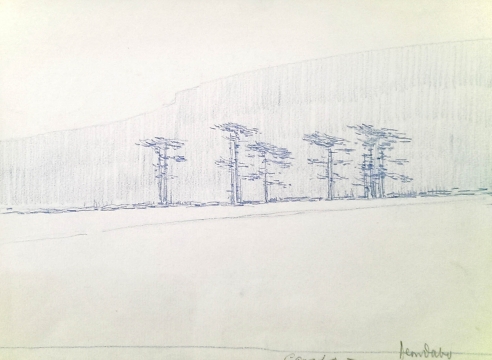 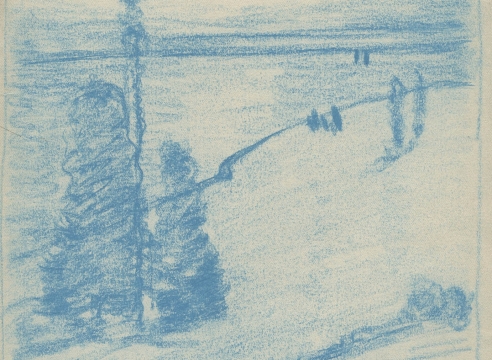 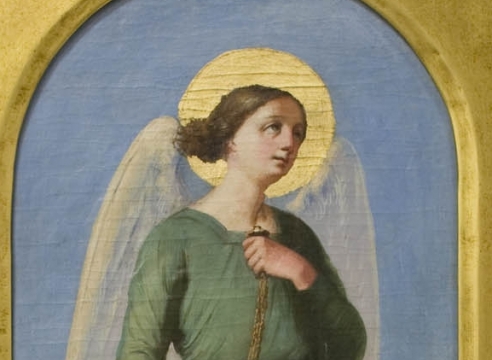 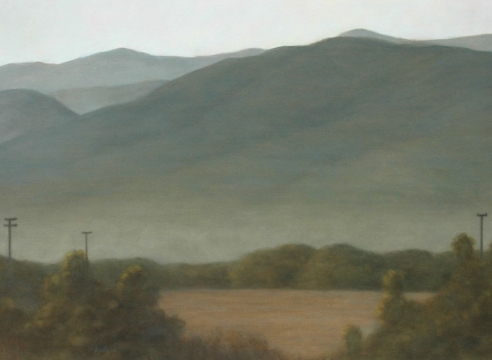 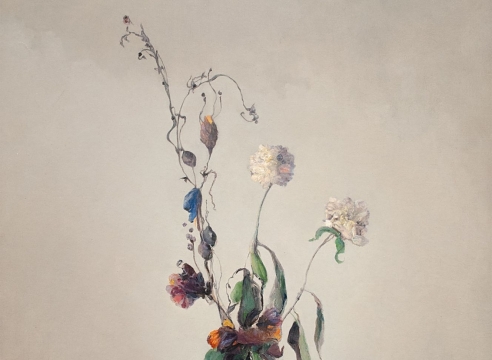 THE ANCHORS
Masterworks from the Estates at Sullivan Goss JANUARY 2 - MARCH 2, 2020 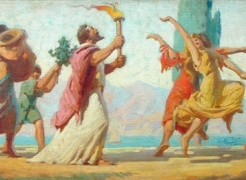 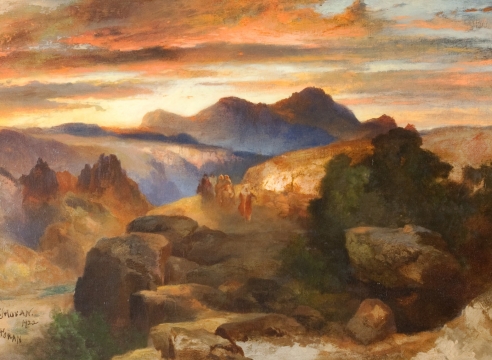 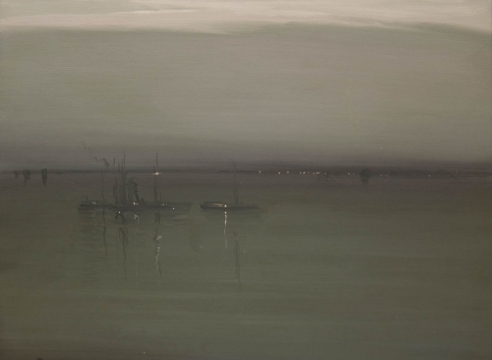 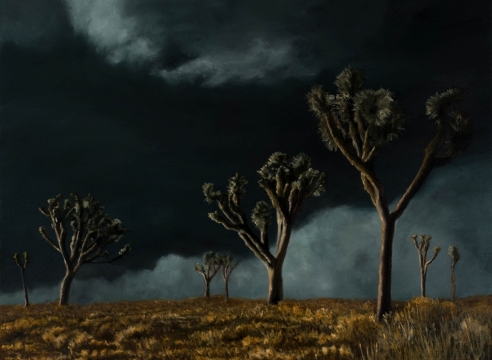 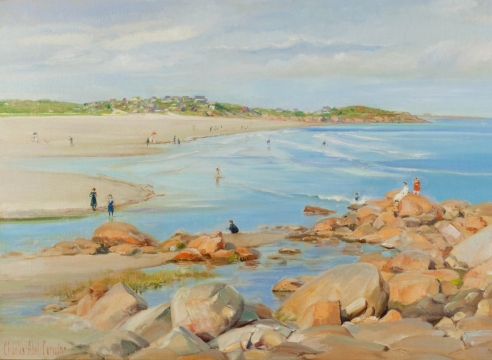 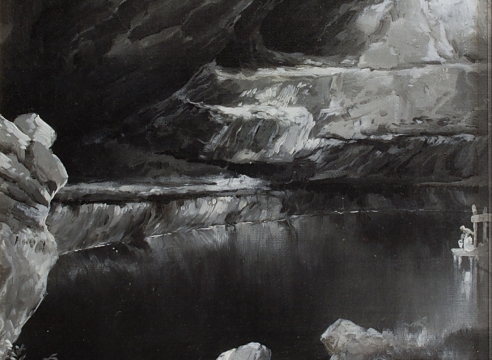 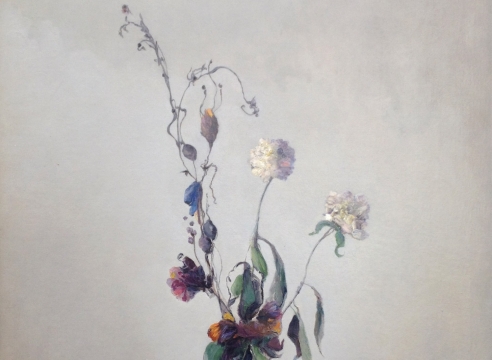 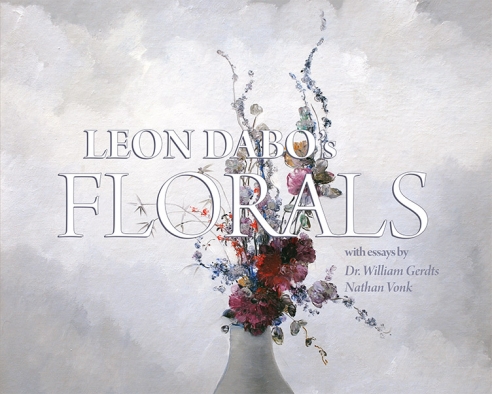 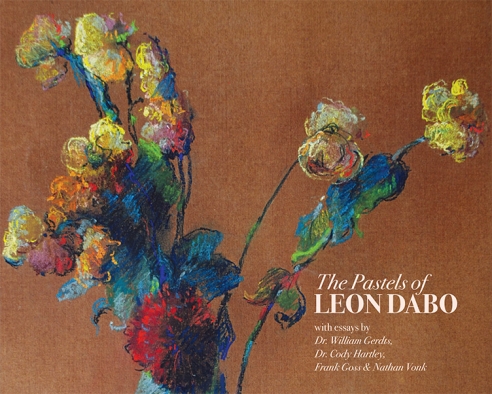 The Pastels of Leon Dabo
August, 2012 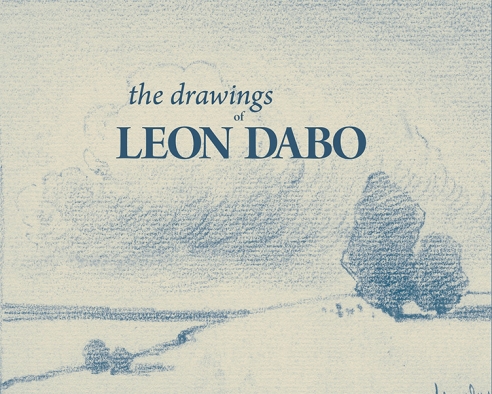 The Drawings of Leon Dabo
January, 2012 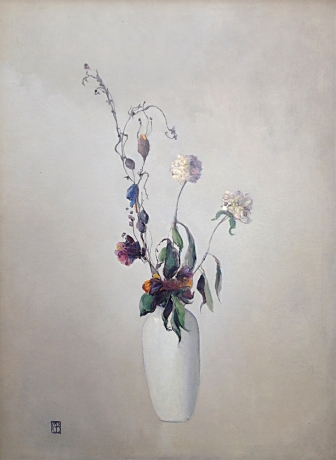 To inaugurate the fall art season, Sullivan Goss, An American Gallery will present an exhibition of paintings, drawings, and pastels from the Estate of French-born American artist Leon Dabo (1864-1960). 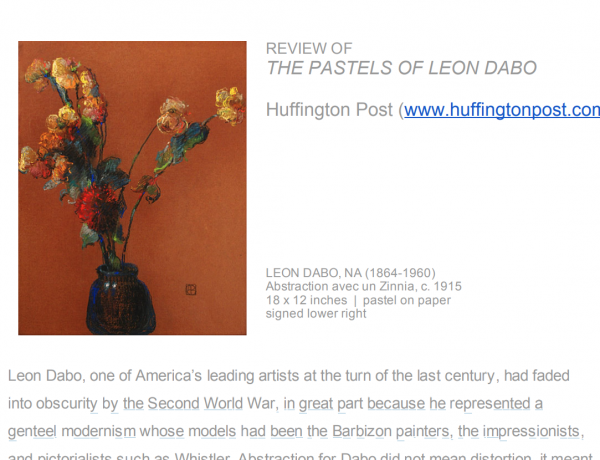 Review Of The Pastels Of Leon Dabo 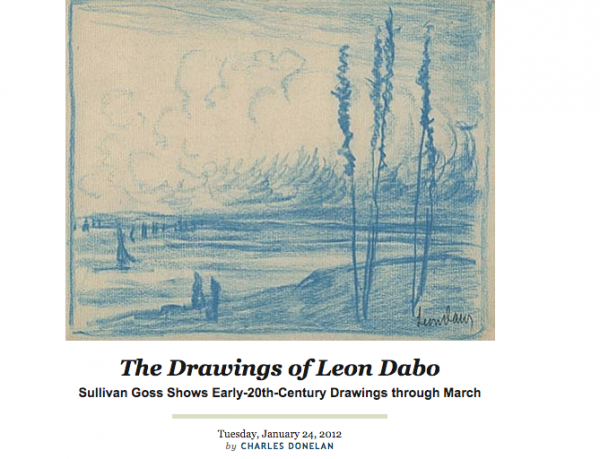 The Drawings of Leon Dabo

Leon Dabo was a pivotal American artist in helping to push the Romantic sensibilities in late 18th and early 19th century painting into new territory with the infusion of ideas from the Aesthetic Movement and its Asian art forebears, Symbolist painting, and Tonalism. In practice, Aestheticism, Symbolism and Tonalism overlapped to a significant degree, and artists like James Abbott McNeill Whistler (1834-1903) and Leon Dabo are often talked about as having belonged to more than one of these schools.

Dabo studied with the great Tonalist and Aesthete Whistler and with Pierre Puvis de Chavannes, the French Symbolist. He also studied with John La Farge, from whom the younger artist learned about technique and the innate value of beautiful environments. Dabo's art stayed true to the philosophy of "Art for art's sake," an expression so often ascribed to the Aesthetic Movement that also signaled the late nineteenth century shift in art's function from one of moral instruction towards one of poetic evocation and sensuous pleasure.

Gradually, Dabo's ability to ground his progressive ideas about art in the rigor of traditional Academic craftsmanship made him one of the more sought after artists in the early 20th century. His facility with both French and English and his strong cross-Atlantic ties made him an ideal choice to help organize the International Exhibition of Modern Art (also known as the Armory Show) in 1913, an exhibition that would change the course of art on both sides of the Atlantic forever more.


Group Exhibitions (selected from list of over 240 group exhibitions)

2003  After Whistler: The Artist and His Influence on American Painting, High Museum Museum of Art, Altanta, GA